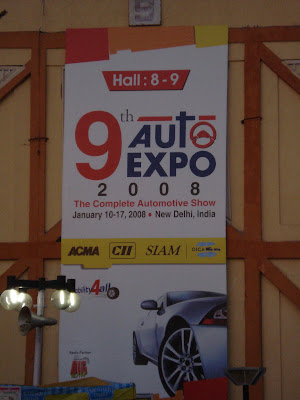 2) Maruti unveiled two concept cars: A star and Kizashi. The importance of A star is its exterior styling was designed my two designer of maruti. A star will be launched soon in India . this will also be exported to Europe from maruti this year.
Seeing A-star, Senior Managing director of TOYOTA MOTOR CORPORATION says "you have changed the way how small car looks".

Kizashi , the concept car was totaly designed by suzuki and it was previously shown at Frankfurt auto show 2007.

Splash was shown. this is also a small car which will come to indian market in 2009.

SX4 hatchback ( the yellow colour SX4 rally car, in photo) was shown that will participate for world rally championship 2008.

4) Scoda launched Fabia. it also showed many of its us and europian market car (like RS, Roomster)

5) Hyundai unveiled the most expensive concept car named " QARMA Q". if it comes to market it will cost arround 4 crore.

6) Honda had shown the hybrid version of CIVIC, ACCORD and a concept car based on hydrogen fuel.

( All pics have been uploaded)

To see the pics open the following link.