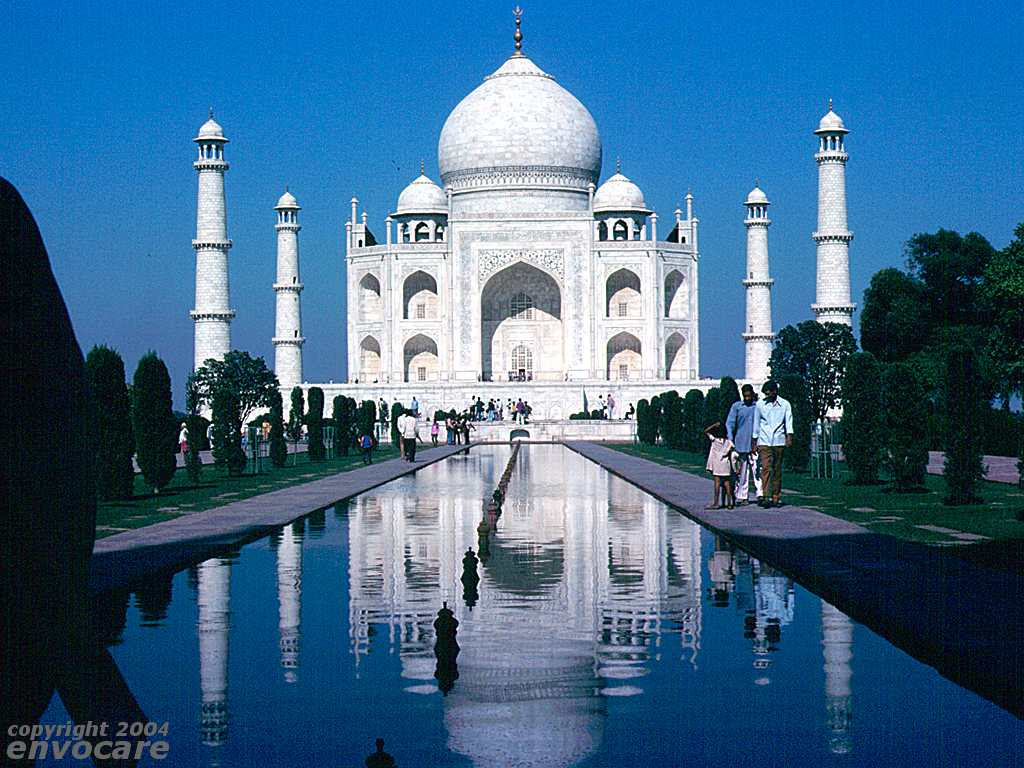 It was nearly a blink-and-miss scenario when this little poll button called "Vote for Taj" nearly went unnoticed from me as I tuned the TV to NDTV for some news bites.It instantly grabbed my attention as it said 1 day to go !! Later it dawned to me that it was really a campaign- so called people's campaign for getting Taj in the list of Seven Wonders of the world. I wonder what the hullabaloo all about?Why would the TAj, truly a wonder in every sense of the word, suddenly need all these publicity and endorsements?Was it not one of the magnificent man-made structures which still has not ceased to awe generation after generation?why on earth one fine day everyone seem take notice of Taj and start feeling that it would need the certificate of Magnificent Seven !!!So, many questions came flooding in.Little can I answer convincingly.
A teardrop on the cheek of time,that's how Gurudev Rabindranatgh Tagore described Taj Mahal. Taj Mahal - a symbol of peace, an embodiment of timeless love,a structure built in the loving memory of Mumtaz Mahal by Shahjahan as history might put blatantly.But, there more to what history might testify.Far from being a grand edifice, a colossus of a structure made from the finest of marble;it is the symbol of Hindustan, its embedded in our ethos,our culture,our very existence, our literature, our constant source of inspiration and above all our national pride.
Taj is a gargantuan testimony of the yores gone by, an embodiment of Indian History.It has seen the Mughals rise and eventually fall amidst much bloodshed,con piracy,treason and regicide.It is the witness of the Uprising and the Indian Freedom Struggle.It has been a silent observer to the turmoils that have embroiled India- Indo-China War, Indo-Pak War, Emergency,demolition of Babri Masjid,Godhra carnage and shall still behold many more to come.It has come clean in all situations, virtually untouched by religion,castism,communalism.
There are two kind of people around us.Those who have seen Taj and those who haven't.The ones who have been fortunate enuff to see, swear by it.The ethereal beauty has enthralled the Indians and the foreigners alike.
So, it boils down to this-Is all these as-campaign and fervent collection of public consensus is at all necessary?
What strikes in mind is plain business. Mobile operator companies view this as a great opening for having their cake and eat it too.Stirring junta's emotion means-million of SMSes being send to and forth and that translates to millions of revenue.So, no wonder everyone sees business opportunity here and everyone is in a jiffy to cash in.Anyways its a win-win situation to them.Even if the Taj loses out ans fail short of making it to the list, they still got to keep the booty!!!
Is thsi what became of out Taj!!!!

Don, a.k.a Firang, a.k.a, Phat man said…
Good post Karma. And I totally agree with you. And it's hypocritical of me to say so (since I too voted for the Taj), but we have to ask ourselves this. Will people stop coming to visit the Taj if it weren't on the list? Would we as Indians see our love or admiration for that gargantuan (as Karma said) of a monument diminish? I think the answer is no. Which brings out an observation of the very nacent quality in each and every human, 'the need to be acccepted by the masses'. I'll try to write a post on it as this is a topic I feel strongly about.
Again Abhishek, great job.
July 5, 2007 at 10:05 AM

Sakshi said…
I too have been campaigning for Taj. And despite evertything Taj would always remain the only monument that is the epitme of love. And visitors will throng the place. But then Taj being a part of the seven wonders does become a matter of pride. If the largest democracy in the world, can put enough votes for this, and vote for all the reality shows...which are numerous... then it truely is a shame.
July 5, 2007 at 11:00 AM

Unknown said…
what i particularly dont like abt this campaign is that votes can be cast only thru internet and mobile..moreover thr can be multiple votes from an individual..it isnt justified at all..

think if thr wud hav been 7 picks from india..thn we wud hav put all of thm in d seven list..

regarding the mob operators going for 'chance mein dance'..well who wudnt try to cash in on the situation..its commerce..

Shayon said…
Wah Taj! Well, one question start this whole comment with. Before you try answering, consider yourself to be either a farmer in Brazil or a construction worker in Luxemburg or prolly some mathematician from St Petersburg. Now, do you think you'd have heard of the Taj had it not already been included into the hall of fame, per se? I can recall one encounter I'd once had with a Japanese female in jsr itself. She had come to jsr that very day for training in TATA STEEL. She'd come down from Delhi, where she'd stayed for just a day. I was asking her if she'd visited India Gate or Kutb Minar. She said she hadn't even heard about it. All she'd heard of was Jantar Mantar. Alas, I hadn't asked her about Taj Mahal. You know, I don't feel it's about recognition, it's more about the prestige of being officially recognised. Think of it on these lines. Everyone in your class knows that you're a whiz in maths. But nothing beats the exhileration of being felicitated by your school's principal on annual day, for the same. Everyone knows the contribution of Raj Kapoor to Hindi Cinema, then why does he still receive life time achievement awards on every other felicitation ceremony?
July 5, 2007 at 4:16 PM

Sakshi said…
Rathindra- The voting system that you are talking about requires a lot of transperancy...and that is very difficult. And then too we prolly would have an edge coz we do have a huge population.

About the election commission using the same method, hmmm I think I can put fwd that Idea to them. They anyways look for newer and innovative ideas. But then do you thonk this proposal will pass in the Parliament??
July 6, 2007 at 11:45 AM

Dude, talking abt ur "chamnce mein dance" philosophy, I thought I'd share some more info with you. Since I ws posting my last comment via my mobile, I couldn't quote a sms I'd received from Airtel about 3 days back. Here it goes:

Now temme...had it been just a means of earning cash, why did this particular operator make messaging free? On the contrary, since the countdown is drawing closer, there'd be more people voting now than never! What do you have to say to this strategy of theirs, now?

Hmm...voting for the general elections via messages and internet? Well, I think it's a very novel idea, provided everyone of us happen to possess a unique citizen ID and a password. That way, we shall never have to bother about going all the way to vote!!
July 6, 2007 at 11:58 AM

N yeah...I'm pretty sure that the it is you hu's instrumental in putting up the latest banner on our wall mag. It looks, pretty cool, must say, but then doncha think it looks a bit weird with the blue background visible at the back?
July 6, 2007 at 12:01 PM

i got a different message from airtel::

vote for taj..first vote is free..

did u read ur msg carefully??

regarding the banner,well i've been looking for templates..ek pasand aaya tha..lekin code mein error tha..
why dont u do smthing abt the looks??

aah..first thing i m rathindra..not rathindar as u mentioned in comments to dion's post..cud hav been a typin error..i take care to write ur name as sakshi instead o sakchi(a place in jsr)..

about e-vote::
we can keep it as an option for ppl like us..rest can vote thru the conventional way..transparency can sure be brought about..whats the use of so many computer geeks in this country..someone can surely come up with a secure n reliable voting program..

no matter what, ppl always find means to beat the system..may be it will reduce booth capturing incidents..but hacking into election commission servers may rise..

the bill may pass..but thn our politicians will start hiring computer professionals instead of goons..
July 6, 2007 at 8:25 PM

Shayon said…
@ Rathz
Dude...even if you get a message saying "first vote is free", how many times exactly would you expect people to vote? I'd rather say tht idea is better, 'coz then it'll discourage people from casting multiple votes. And as for the sms I got, I'd posted it ditto. No mistake on that part.

abey...as far as aesthetic aspect of the page is concerned, I'm the last person u shud ask. Too bad on that respect :-P. But then, I think I can do something about the banner. Let's see.

Sakshi said…
@Shayon-
I love your idea about the way of e voting. make a project, n lemme float it to ECI. I can do that... u knw it.

Shayon said…
Make a project? Huh? Do you even have any idea of what kinda scale this kinda project needs to work on? And you are asking me to go about it single handedly? And anyways, the very idea needs to be bought first, even before any work is done on this purview!
July 8, 2007 at 2:19 PM

bak 2 business..
ya if u can float the idea thn why not..technicalities will come later..first the debate will come up regarding the proposal..
July 10, 2007 at 12:58 PM

By shanoob January 14, 2013
Hi all, I recorded this bit when Sam came to Bangalore... quality of the video is poor. enjoy.
3 comments
Read more

By Unknown September 01, 2009
This a distress call to all TWM folks. This has been the longest duration of inactivity for TWM. So is it that we are all too busy or have all of us hit the writer's block. Let's break the spell of inactivity....HOW?? WHAT SHOULD I WRITE ABOUT?? I have an incomplete draft, shall I post that? May be I will do a recap of the past few days..No mood to write paragraphs.. Connect the dots yourself.. * Kaminey - Movie was good, the ending could have been better..The bong mafia coming with a long gun to the fight scene was really comic..Fahid Kapoor ki acting mast thi..waifey aap log ye movie dekhey kya?? * Books - Finally I read the book Love Story by Erich Segal..Hmmm the story is good but the effect of the classic book has not yet got into me..Meanwhile I am also reading 'The Great Indian Novel' by Shashi Tharoor..I will surely recommend this book..Tharoor has splendidly blended the tales from Mahabharata into the modern Indian history.. *Movies - I watched 'Littl
8 comments
Read more