Making the Christmas more than merry!

By Sakshi December 26, 2011
So, it is Christmas and we are all getting ready to bid adieu to the year 2011!
I am sure that a lot of us went through loads of ups and downs, and that we would be looking back at certain fond memories of the year gone by and at the same time, we will be wanting to start the New Year *The last year according to Nostradamus or some one or the other* before the world ends.
And, thank heavens that I got to meet loads of TWM members before the world is kicked into the chaos gear. So making the Christmas Merry, this year, we had with us, in saddi dilli, Dion, Raj & Shayon *Shayon's moved back to Mumbai* and there were us- Mannu, Gandhi, Debu and myself!
We missed the rest of you! And, it would have been one hell of a party had all of you been here!
So from the lunches to the dinners and to the absolutely random trip to dumdama lake and then Jim Corbett national park, the guys had loads of fun *I am hoping that my assumptions are right*.
I of course, being the Cinderella girl, had my timings to keep and therefore, I could not spend as much time as I wanted to, but whatever time I did spend with all of you all- It was awesome. *Being the girl of the group, is so much of fun, I think I got taller by at east two inches thanks to all the leg pulling*.
Here is the picture of the group, one of the best *Or so every one says.. of course getting Dion to keep his eyes open in any picture was a tough task* 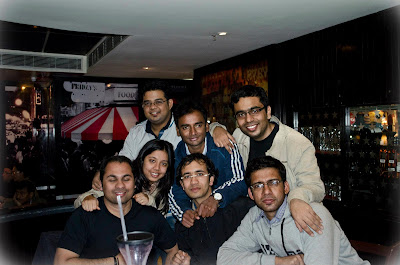 I feel, that we should as a ritual make sure that meet if not more often then at least once a year, even if it is for just one odd day!
To meet friends,
to live and re live the memories,
of the past, and making a few more,
of the present, to remember and
smile broadly, again and again!
Wishing all of you, a very Merry Christmas and an AWESOME 2012!

raj alakshendra said…
Hiii , certainly this is the best wall mag pic . Many of u r missing in that ...
I had hell of a fun in delhi .. Sorry sakshi for irritating u a few times but u must have got used to this :p

Here in thailand , its fun but travelling with parents has its own restrictions but thn for their happiness we should have such trips sometimes ...

Unknown said…
Nice pics..Though I could not come I'd kept an eye on the happenings in Delhi! It was great to video chat with some of you folks while in Gurgaon at Gandhi's place..

Raj - haha..ye enjoy and have a not-so-wild-holiday..btw there is some historic Axom-Thai connection, mujhey bhi Thai jana paregaa ;)
December 27, 2011 at 5:22 PM