Sojourn in the Hills 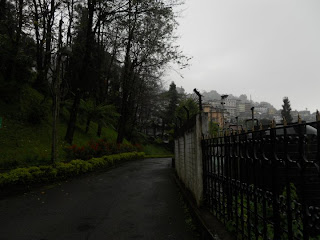 My name is Rajorshi. This is my introductory post in any blog site.I'm not much into blogging but then I followed TWM for quite sumtime now and I must admit that the posts here are not just a good read but an amalgamation of creativity,knowledge and fun.

Had you been following Raj’s tweets in his FB acct in the past 3 days, you must have known by now that the 3 idiots hit the hills once again! And this time, as per the sobriquet, it was the ‘Land of peace & tranquility’. 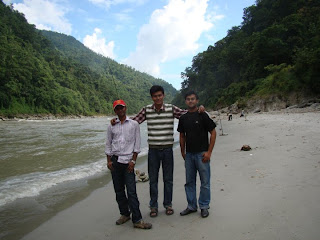 As per the itinerary, we whistled out of Sealdah on Thursday night, Darjeeling Mail and reached the next morning at NJP. After a grueling bargaining with the touts, we finally managed to get a shared sumo and reached Gangtok after a well over 4 hours drive maneuvering the 125 kms. However, we quickly felt that we left the the hustle bustle of Siliguri behind us and by the time we reached the outskirts of the city, we completely forgot the heat and dust. The roads were not the usual twisters (snake like U-turns and hair pin bends) as is the case with most of the hill stations while the good old ‘Teesta’ river gave us a good company throughout our road trip. The woods, bridges, river, gorges everything gave a serene and a peaceful look enough to refresh you and relax your senses. Once we reached Gangtok, it was evening and we took a stroll in the nearby areas including M.G. Marg which truly deserves a special mention. It is around a 1 km stretch of road paved with stones and decorated with multi coloured fountains lit by beautiful lamps with flowering creepers holding on to them. It is the main market place where the footfall of localites and tourists is always high. We took a hotel adjacent area from where we could get a lovely view of this road. After a short nap, we went to a local pattiserie and had pastries, puffs, tarts to our heart’s delight followed by some shopping. The next day, we went for local sight seeing in the nearby areas which included places like Tashi view point, Ganesh Tok (we were lucky to celebrate Ganesh Chaturthi at 7000ft),Hanuman Tok, Lingdum monastery and few other spots. The weather was cool with intermittent rains throughout. That night we went for a continental dinner @ ‘The Tibet’ restaurant. We also saw a group of enthusiastic foreigners who are on a mission and adventure trip from Gangtok to Jaisalmer on auto rickshaws !!

Next morning, we had planned to visit Tsomgo lake but unfortunately due to bad weather conditions and landslides, we, specifically me! (The other 2 people – Ratz and Raj had seen snowfall earlier) missed the snowfall which had started in those areas. 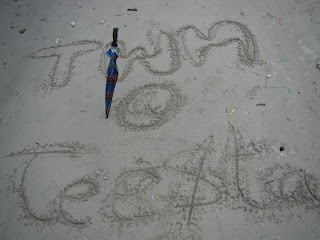 While returning back from GTK to NJP, we enjoyed a stroll (thanks to the driver who made a stopover) at a small beach along Teesta river where we found people angling. We finally left the hills and reached the plains again, but everything about the trip including the weather, nature and the people entice you and keep pulling you towards it for a next time…

Raj is on everyone's ignore list so only this post will bring our travel to everyone's view ;)

Sakshi said…
@Rajorshi
Hi! I am Sakshi, and I have no idea who you are! But welcome aboard. :)
Great pics, and I have been seeing the trip updates on my FB accnt!

@Rathz
Gave me a good idea, about the ignore list :P

@ sakshi
These pics are courtesy Ratz.Well, yes, even I haven't met many ppl in this community but I know a few ppl who are/were @ Kol. Yes,it was a good trip,more relaxing than travelling and checking out points..
September 14, 2010 at 7:59 AM

@ Rajorshi,
Welcome to TWM. Hope to see more posts from you in the future.

@ Rathz,
Unfortunately, I haven't put Raj on the ignore list as yet! But nice idea! ha ha ha ha!

@ Sakshi,
Are we going to get anything from the Master himself, or has life in Delhi made him more lethargic than usual?

samik said…
@Ramu But you told me that u were from Newark!!

@Rajorshi Unlike our trip it seems you ppl had spent quality time in Gangtok.We spent 90% of our time inside the vehicle!!
September 14, 2010 at 8:45 PM

raj alakshendra said…
finaly I am here to comment . Actually my broadband is not working so I am here commenting from my phone . Its a tiresome job to type on phone .

@ Raj Bhai
As we call him by this name .welcome to the group . Post is Very good . U write very good with nice selection of words .

@ others
We had an awesome trip . Whenever we 3 go put our main motive of the trip is to relax n enjoy the nature,s beauty. . It doesn't matter even we miss few places to see . gangtok is a colorfull place n people r always dressed up at any time of the day . The north east girls r ultimate .infact All of them have perfect figure .
Btw m not on anyone's ignore list on FB . :) actually people were following my updates n commenting . My BB rocks . It is fucking so fast .
For more pics of the trip visit my FB. Profile .
September 16, 2010 at 8:52 AM

Rajorshi said…
@ Raj
thnx for the comments and also proposing the idea of me writing this post.. Actually i was wondering tht how come you are not commenting still?? :D

Well, that's a lil complicated name to pronounce and to write. I had to actually check the spelling of your name above to get it right.:-D
Jokes apart, really lovely description,dude! I felt so jealous of you guys on reading the post that you had such a great time together. Keep more articles coming.You've got a good writing style. That also gives us lazy asses some new dope to read on the TWM instead of seeing the same posts hanging till eternity.
September 17, 2010 at 11:17 PM

Thnx for the comment. I'm happy tht you'll liked my post.. Well regarding the name, ppl call me Raj bhai (similar to Mannubhai :-D )which Raj has mentioned above and tht wud be simpler..
However, there's another Raj already there!!
September 18, 2010 at 10:05 AM