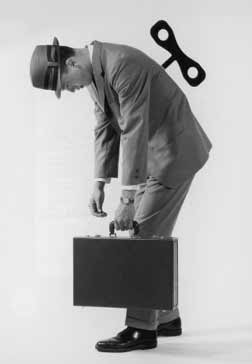 Just about time !!
Yeah what a great pastime than to to head for a net cafe after u have ur ass rot in the rickety chairs of office....not an ideal course of action for karma who would rather have a steaming cup of hot,muddy tea in his home.
but i guess he is not in ease no a days...what he has seen or heard for last few days has really got him worrying....worrying so much that he has chosen to rush to post something that would stall the forthcoming predicament...confused as u may be..but right now he has no clue what is going on around him,something he is not a part of but still cannot deny that its an irrefutable part of him..what can a man of such low-stature and feeble psyche could do to stop two frenimies (nope its not a typo error,click and see the fun)from biting ones another's head off. One seems to have chosen this portal to unleash his wrath and other seems to write things which are neither articulate nor an attempt for self-redemption.
Anyway I guess lodsa line has been typed without any intent and karma is already feeling his eye water( is this a part of computer related injuries ??)...
As an attempt to mitigate what has been said or written( or shall I say what mud has been slung) for last three-four days on this page....karma has rummaged into his belongings to took out some happy hours from eons of time...

those were the happy times and not so long ago
how i wonder where they had gone
but they are back again
just like a long lost friend.......

Oops ! sorry just got lost in reverie...lovely song by the Carpenter siblings !
Well,ya lets come back to the point.These group what they call themselves ..ah yes Topfloorers,what an menagerie !! how can sucha bunch of feisty and mercurial guyz ( now they have a lady too in their group) stick together!! I mean it has been 2 years nearly when left the corridors of the college but still they seem to share same kinda passion for doing everything weird.Do you reckon they are just group of juvenile boys still under the impression that they still are great friends and share the same passion together? NO THEY ARE NOT!!!The tide of time or the winds of change still cannot wash away the rock-solid foundation of their friendship...and never will.
Karma reckons that rather wasting his breadth( or probably stressing out his metacarpals!!),he would show you show something he reckons might help in putting an Confundus charm (karma is a die hard fan of Harry Potter) on everybody that a nasty bickering had never ensued between two of prominent member of the Order( oops here comes Potter again). 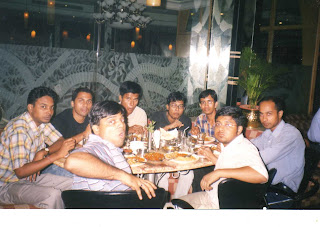 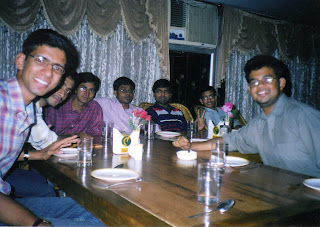 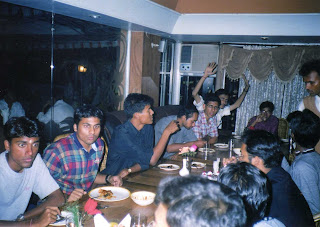 And now Topfloor the inside story 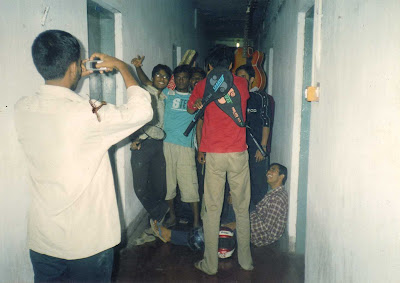 Yeah u have come to the ryt place...this is Topfloor !! 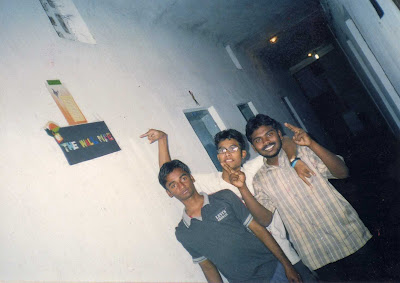 Thats Rathz under the royal treatment in NIT ishtyle !! 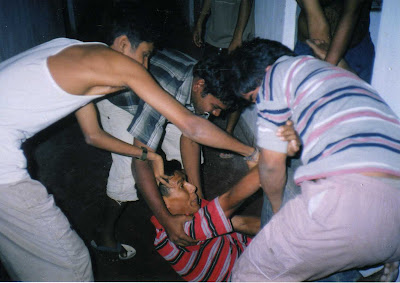 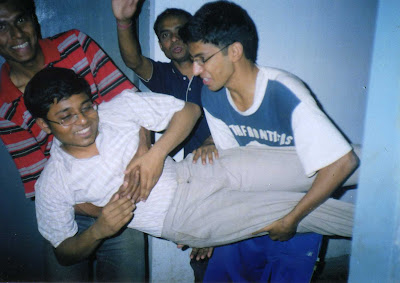 I have had enuff can some one get the party going !! 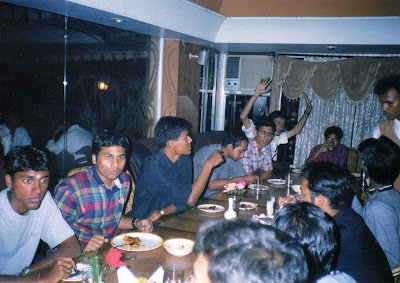 Well, I guess the last one is enuff to sum what karma had to say.Life is too short to be little and everyday should be king size.Bickering and altercation will occur coz we are so very different from each other( try putting different breed of dogs in the same kennel and u wud know why) but those should never be stretched so that it leads to fracture of the very fabric of friendship.The topfloorers ,whose notion may it be, was a concept that was lapped up instantly by us because of its innate charm and novelty.There are times when things go horribly wrong or thing that u pined for might not materialize but that may not necessarily lead to a fallout.What good will it serve someone do explain me? U see the very threat of pullout has made everyone run amock in shock and people hitherto either too shy or too lazy to scribble on this page have come out and express their opinion.
I hope we donot use this forum as a medium to vent our anger and blame-storming,but as an instrument to forge our kinship to an indelible impact. Heres couple of unforgettable lines from Mary Hopkin's(i doubt if u ever heard of her) debut single...Cheer up guyz !!

Those were the days my friend
We thought they'd never end
We'd sing and dance forever and a day
We'd live the life we choose
We'd fight and never lose
For we were young and sure to have our way.

Don, a.k.a Firang, a.k.a, Phat man said…
Beautiful.
Those two songs are one of my favourites. Long time Karma. None of us could have put it any better. The treats, the GPLs, the bakar time. Ha ha ha ha. I never had a doubt we'd break up. Give people time to vent their frustrations, and let them cool down.
Thanks once again and it's a pity we can't meet this time.
D
December 5, 2008 at 6:48 AM

Mannubhai-The Madman said…
Wow!! Karma has got this uncanny habit of putting evrything in such twisted sentences yet writing them so beautifully that it's a pleasure reading them..Rock On!! the article rocks especially the first part ."yesterday once more" & the second song(although i havent probably heard it for a longtime & dont remember it Thanks to my growing hunger for more & more metal)brings out something which is deep inside all of us
& guys!!!!! just c the pics we all look like kids..dont we ??
December 5, 2008 at 10:49 AM