The Law of the Garbage Truck

By Sakshi January 29, 2011
I am going to post here a story that was a part of the farewell speech that my younger sister's school principal gave today at her Citation Ceremony. I would normally not take notice of the usual inspirational and motivational things that the school principals and teachers say, heck, they are all almost the same. As a matter of fact, I remember the day we had something similar in Modern Bk, but I don't think that it really meant too much to me and I don't remember a single thing of the speech that the dear principal had given. *Yeah, I was not interested coz I was not attached to the school, I was there for the last two years and that is one of my major regrets- Changing my school* Any way- I am very attached to Sister's school and the way her schooling has gone. Being 7 years younger to me, I had an opportunity to relive my school life all over again during her years in school. 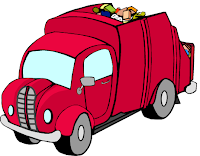 So today when her Principal bade their batch farewell and bestowed them with love, affection and wishes, she also gave them and all of us present at the ceremony a beautiful thought through the story that I am reproducing below. It is called 'The Law of the Garbage Truck' (Follow the link to access more information on the main person behind this whole thing) and it goes like:

"How often do you let other people’s nonsense change your mood? Do you let a bad driver, rude waiter, curt boss, or an insensitive employee ruin your day? Unless you’re the Terminator, you’re probably set back on your heels. However, the mark of your success is how quickly you can refocus on what’s important in your life.

Sixteen years ago I learned this lesson. And I learned it in the back of a New York City taxi cab. Here’s what happened.

I hopped in a taxi, and we took off for Grand Central Station. We were driving in the right lane when all of a sudden, a black car jumped out of a parking space right in front of us. My taxi driver slammed on his brakes, the car skidded, the tires squealed, and at the very last moment our car stopped just one inch from the other car’s back-end.

But then here’s what really blew me away. My taxi driver just smiled and waved at the guy. And I mean, he was friendly. So, I said, “Why did you just do that!? This guy could have killed us!” And this is when my taxi driver told me what I now call, “The Law of the Garbage Truck™.” He said:

"Many people are like garbage trucks. They run around full of garbage, full of frustration, full of anger, and full of disappointment. As their garbage piles up, they look for a place to dump it. And if you let them, they’ll dump it on you.
So when someone wants to dump on you, don’t take it personally. Just smile, wave, wish them well, and move on. Believe me. You’ll be happier."

I began to see Garbage Trucks. Like in the movie “The Sixth Sense,” the little boy said, “I see Dead People.” Well now “I see Garbage Trucks.” I see the load they’re carrying. I see them coming to dump it. And like my taxi driver, I don’t take it personally; I just smile, wave, wish them well, and I move on."
I was very taken aback when I heard this. And, I could not help but share it with you all here, because, I know that this story has influenced me and loads of ways.
Take care and Cheers to you all!

Mannubhai-The Madman said…
Very good lesson and of course good post! Loved this "Law of Garbage Truck" theory! Will keep this in mind the next time someone tries to dump his garbage truck on me :-D
February 2, 2011 at 11:17 AM